So here’s a little of my back story since I’m starting my blog a little late. I was diagnosed with stage two Hodgkins Lymphoma December 21, 2006. (I just felt a little like Doogie Howsier while writing that). I had just moved to an awesome new apartment, started a new job, was getting settled, and then found these weird lumps on my neck. I thought nothing of them and just thought they would go away on their own. I found out that I had an appointment that I had scheduled months ago to meet my new primary care doctor – so I went. While I was there I casually showed her the lumps, and she even brought another doctor in to look too – they both thought they were fatty tumors. They sent me to get xrays and a catscan and then to a general surgeon – I went to the surgeon on my lunch break – not thinking anything could be wrong. I had been calling my doctor for the past 2 days, waiting for my CT scan results – and everyone was saying, “Hey, no news is good news” so I went to the surgeon. He felt around and thought the same fatty tumor thoughts – then I made him read the CT results I had sent to him since my doctor was ignoring me – he got super serious and quiet. The nurse had to talk to me while he read the results so I wouldn’t freak out even more. He then told me we had to talk in his office, and that’s when he told me they thought I had cancer. The rest is a blur, I had a biopsy surgery and was diagnosed right before Christmas. Oh yeah, and I got a new doctor.

One of my first thoughts was – I’m not going to be able to be as fun as I am. So, I threw myself a party. One last hoorah of drinking and being crazy before chemo – pre-chemopalooza! If you throw a palooza at the end of anything it’s always better! I invited everyone I knew for the Saturday before I started chemo. I’m pretty sure those that came had a blast (to see pictures check it out here http://community.webshots.com/user/kellyk9999 ) I know that I drank a whole bottle of pink champagne and was hilllarious, so all was good in my book. Most people had tons of stories from the party and are still talking about it, so it was a success in my book. I think I missed my calling – I should become a party planner for cancer patients. I’ll throw parties, make t-shirts, provide candy cigarettes and tacky wigs – it’ll be great! It still might happen. My master plan was to make t-shirts, chemopalooza t-shirts, probably a picture of a sad lamb on the front, and then on the back I would put my scheduled chemo dates – like tour dates, and cross out the ones that happened already or put sold out… it still may happen, I just haven’t found a good site yet and I’m cheap.

My goal was to be the funniest cancer patient. I think I’m doing pretty good on being funny, but it’s starting to wear on me. When my hair started falling out a few weeks ago it officially hit me that I have cancer and I’m not normal like everyone else. I’ve got really good hair, it’s super thick and I’m obsessed with hair products so my plan was just that it won’t fall out. It’s still my plan, but it starting to fall out made it feel a lot more real.

I just finished my 4th chemo treatment on February 22. I still haven’t gotten pukey sick like everyone talks about. I’ve actually even gained a few pounds, who knew! I remember when I was told I had stage 2, they asked me if I had lost a bunch of weight, which I hadn’t, and they said that I probably won’t then. I was pissed. At least let me be super skinny with cancer, sheesh! What a scam. Apparently, if I was stage 2b (instead of 2a) you lose all sorts of weight and get itchy…. I guess if I only found it later, ha ha.
4 treatments out of 8-12 isn’t bad. I’m considering this my half-way point until I find out otherwise. Tomorrow I’ll be getting re-tested with another PET scan to see if the cancer is gone. I’m hoping it is. As awesome as it is to be half-way, it feels like I should be done by now, and I still have at least 2 months left! I’m sucking it up, I’m a trooper. I just hope my hair sticks around until the end. If it gets to the point where I have to shave it, my dad said he would shave it with me, I think there might even be a few more people too. But like I said, the plan is that it’s staying.

In a nutshell, that’s my story. I’m finding myself with LOTS of free time now. I just started officially being out of work until I’m better. That’s at least 2 months!!! I need things to do. If you have any ideas, let me know. Or if you find my blog and want to share, please do. OR if you live in MA and want to organize something.... in other words, if you read this, let me know I’ll post more soon. 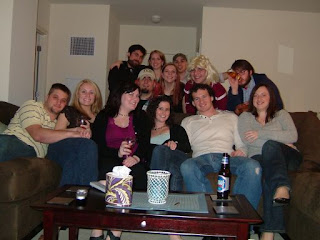 It was great meeting you the other evening at the make-up fest (a.k.a. look good feel better) -- love your site -- you're almost done the chemical fun, I'm just getting started -- your very positive attitude is an inspiration. Wishing you all the best!!

Don't ask me how I stumbled accross your blog...but I did completley randomly! I'm glad that I did though, I've been listening to your music for a good hour now, you've got amazing taste and I read your story which is pretty amazing.

You seem like a really cool person. Thanks for the window into your life and I'm really happy you're on the mend.

Best of luck with everything.

Hey there....I just ran across your blog and wanted to comment. I have Hodgkin's Lymphoma (stage 2) also. I admire your strength, courage and sense of humor. I'm not handling it as well as you...but my circumstances are a bit different....seeing as my son is turning 15 months old on July 4th. He keeps me extremely busy and REALLY tired. My 4th round of chemo was on June 19th. The Dr's will re-evaluate me on July 23rd or 24th. Here's hoping...

Hey ChemoPalooza-girl,
thank you so much for sharing your story. I 've been reading your blog for a couple of hours and finally I found the nerve to write you from Athens, Greece.
My best friend in the world, (more than a sister to me, actually) was recently diagnosed with Hodgkins (IIIA +spleen). She is 25 years old and truly the most amazing person I know, very brave and optimistic and all. She is currently going through her options for chemo (ABVD or BEACOPP). I understand from your blog that you went with ABVD. May I ask what made you go for ABVD and not BEACOPP? Also, some tips (DO's and DONT's) with my friend would be really appreciated. I am generally super-optimistic and I am sure she will be fine once the chemo is over - however I have absolutely no idea of what to expect. Also, I would like to be funny like you, but would that be inappropriate when the humor comes from the friend and not the patient? Thank you so much.
All the best and siderenia (this is the Greek wish, meaning hope you are made of iron ;))
ALex

Awesome post! I am glad all has gone well with you. I am new at this. Was just diagnosed the end of April 2008 with stage 4B - we'll see how it goes. I am really enjoying reading what others have to say. I wish I had your humor. It's in me, I'm just not very funny to anyone but myself. But I guess if I can keep myself laughing that's all that matters! Anyhow, I hope you don't mind if I link to your blog from my site. Take care!

awesome blog! so glad to hear you're done :) cancer can indeed suck it.

i'm getting ready for round 2 of battling the beast. you can check me out at bitsofmyself.com

*sigh* i so wish this were easier.

Glad to meet another cancer fighter who copes using a sense of humor! Good news on your recent posts... I look forward to being able to say the same about myself in a couple of years.

Hi. Found your blog while researching my friends cancer treatment. Thank you...I had a good cry when I read about the T shirt with treatment dates, like tour dates. I don't know why, maybe because I have been on the verge of tears since the diagnosis but I haven't give in yet. I love the idea! And I love the Chemopalooza! I love your approach and I want to have that attitude for my friend. I cooked her a big supper for her and all of her loved ones on the day she went to get the biopsy results. Well, she was admitted to the hospital and never got to eat it... So I am planning a big bash when she goes into remission. I wish for the best for you both. Thank you for your blog.

Thank you for sharing through your blog. I'm 25 and was just diagnosed with HL a couple days ago. Tomorrow I go for a PET scan and find out what stage I'm in on Tuesday. All the blogs I've been reading have made me more depressed about what is about to happen to me. Yours made me laugh and feel a bit more optimistic.

Hi all! I realized I never responded to any comments on here. I'm so sorry!

I thank you all so much for the notes of encouragement and support. I'm glad you have all found inspiration in my blog. Writing was and joking was my coping mechanism. I hope you all find your way to get through this and enjoy being on the other side of treatment soon enough.

Keep making cancer your bitch, you know I am! And I highly suggest throwing a Chemopalooza party for yourself!

Hi there :) I stumbled upon your blog randomly and just wanted to leave a little comment! The doctors found something in my aunt's scans a couple of months ago and even though things turned out alright, I still remember fearing the worst for a loved one. I admire your spirit and I'm glad you are in remission! Good luck!