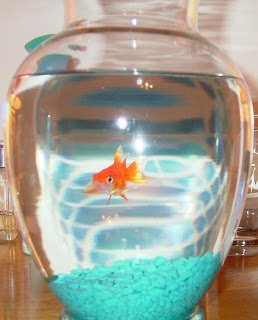 I'm officially on vacation now, me and mom got here around 5pm today. It was much cooler today which is a good way to kick things off. We had so much crap with us - including Leon my goldfish! He survived the trip, but just barely - we had him in this little "travel" container as the label said - but it had these holes in the top of the container - I guess so he gets air -ha - so anyways we put him in the container, then put the container in a little shopping bag with handles...well, apparently the container leaked during the drive to the boat, so when I picked up the bag, the container fell thru the bottom and water went EVERYWHERE!!! Leon almost died!!! Good thing I had some luke warm bottled water in my bag or he would have been history!!

I'm feeling pretty good today - a little tired, but I just haven't been sleeping as late as usual, so I think I just need a good nights sleep - maybe I'll take some Tylenol pm tonight so I can catch up. I'm excited though, my stomach is slowly getting back to normal and the heart burn has been non-existent. I took a shower this morning and washed my hair for the first time in a few days and unfortunately, it's still falling out. It's getting really thin on the sides, so I'm going to try and avoid washing it for a few more days in the hopes that the next time I wash it, it'll be back to "normal" and not fall out. I think I'll be sporting a bandanna for a few days :) Oh and the port is healing up, no sterry strips have fallen off yet, and somehow I accidentally punched it yesterday and so it's a little sore from that - but I figure I'll take the strips off myself in about a week if they aren't gone yet. I want it to heal up nice :)

Oh and I'm breaking in my new sneakers today. I've been wearing flip flops way too much lately so it felt good to actually give my feet and ankles some support. AND, I even took my dog for a mini walk tonight - first time in a very long time! And I was super tired, but I knew he needed it and my dad went to bed, so I stepped up to the plate :) Hopefully I'll keep up gaining energy and walking the pup. I've got this plan that I'll try and take him to the beach every morning to go swimming/walking - I'm not sure when I'll start this, but hopefully I can get in the habit. Oh and speaking of the beach, I'm so excited, I found 2 bathing suits that fit me AND my old one from last year randomly fits me even thought I'm 2 sizes bigger now...weird I know, but I'm not going to question it!!
Anywho, it's getting late. I'll write more soon, and hopefully have some new pictures to post.
XO!
Posted by Kelly Kane at 10:58 PM

Have a fantastic break, hope Leon isn't too traumatised!!!

Hey there have fun!!!
My zofran is a tablet that dissolves under the tongue and is just nasty! i'm gonna try and trade it with my nurses for some nonflavored stuff that they have! hhave a great vacation, treat Leon well since you guys almost killed him hah!
san

Glad to hear Leon made it! Gold fish are tough, sounds like you are, too. My daughter Jane sent me your blog address, you and she share the same birthday. She is at her chemo consult right now. I just wnated to say thanks for writing this, it gives us all an idea of what she is going to go through. I have only read through March, and will finish it later. Just want to say thanks for sharing, I know it can't always be easy. My email address is cjschneid@adelphia.net. Thanks again Cindy