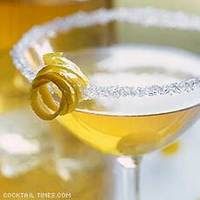 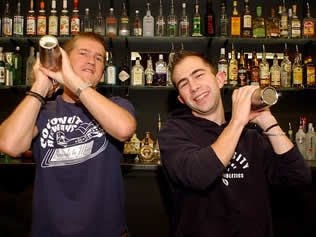 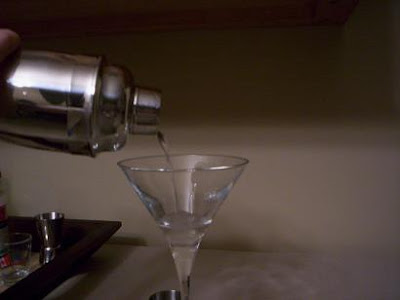 Voila! The newest most delicious drink! You could even call it a Kelly-tini if you want! And for even more fabulousness you should rim your martini glass with sugar... I didn't do that because I was too lazy and thought of it after I poured the drinks.
I made this drink last night for me and Pat - after drinking a couple beers, sharing 2 Scorpion Bowls (with extra cherries, yumm) with him (and racing Mandy and Jeff on the first batch) - and the whole time he was yelling at me telling me how terrible it was going to be, ahh but alas, it was delicious and we both loved them! I ran out of raspberry vodka otherwise I would have made another batch. Note to self: purchase raspberry vodka! After the martini's we played some Wii and I schooled everyone at bowling. I really need to start playing for cash and prizes or something... or maybe snugglypoos? I'll have to work on that.
So anywho, I'm pretty impressed with myself, I drank WAAAY more than on my birthday and I was totally fine! Pretty weird, especially since I had a sip of champagne the other day and got buzzed off of that sip...
I need to take a shower at some point. I'm pretty lazy right now. Even though it's such a beautiful fall day and it would be nice to be outside, I'm going to pass for now because I love my couch a lot right now :)
Anywho, that's my story for now. I'm actually being pretty social this week (Weird, I KNOW!!) and will try and do fun things while I'm out and about. You know how I roll... keeping busy keeps the mind off the C...
XO
Posted by Kelly Kane at 4:54 PM

I have to try the Kelly-tini. I forgot to reread your comment on my blog before responding. Damn chemo brain!

Anyway, I'm going to see if it's possible to come out for the big Party. It's a party, right? Well whatever it is I'll see. Depends on health, finances, blah blah blah.

I'm putting it on my calendar...

Ok I just read your comment again. I loved it! Especially the part about the long flowing hair. I can see us now, it will be like the next Charlies Angels.

Does this June meeting include Leukemia people? That's me. I don't want to feel left out!

A Kelly-tini!!!! I can't wait to try it. Might take a while to get the ingredients here....glad you're having fun,kid.