Alright, alright, I'm a slacker! Canadian Thanksgiving was nice, and our house was jam-packed with people and food. Me, Roland, Dad and Bubby even went swimming in the ocean before dinner! It was a bit chilly, but not terrible. I stayed in the water for a good 20 minutes and only got out because everyone else did :) The weather was amazing all weekend too!

Me and Annie also set up her Wii Fit that she just bought. I honestly thought it was going to be pretty stupid, but it wasn't bad, and it really was a good work out. I also offered to make a deal with her that if she quit smoking I would promise to lose the 40lbs I gained since cancer. Well I gained probably about 30, but 40 would be better for me. So anywho, I thought it was a pretty good deal and it would motivate us both. We'll see what she says. I still have like $500 from my work Wellness Stipend to use this year, so I should get on that - and no Wullie, no stripper workout classes!
By the by, I changed the first song on my playlist this week to a beautiful song by Ray LaMontagne that I love. Thoughts? I purchased two more of his cd's on Amazon.com and should getting them tomorrow...his voice is so relaxing and soothing.
Hmm whatelse has been going on.... I had my second Improv class yesterday afternoon. It's really fun, and I always laugh my ass off! I still haven't made it to a show yet, but I will definitely this coming week. I'm still liking the people in my class too. I find myself drawn to certain people's humor and style more than others, but all in all, everyone is hilarious. Some have really dead pan humor, some are really creative, some are good with one-liners... and the best part, I heard the people in one of the other classes are really boring and not fun, so that makes us even MORE fun! Haha!
After my Improv class I went to Jackie's birthday bonanza - she's the woman that owns the spa. Pat was supposed to come along as well, but he blew me off to watch the Red Sox at a bar. Meh. We had about 25 people for dinner at this cute restaurant down the street from her spa. After dinner, we went back to her apartment and had drinks and had a bon fire in her backyard. It was fun, but chilly :) Her apartment was beautiful though. She has such a knack for decorating, her place looked just like the spa! Super luxurious and relaxing, with cute stuff on every wall and shelf. I just wanted to move in, or make her decorate my place!
Other than that, not much else going on.
Here's a pretty picture I took while at BI... different that my usual ocean pics 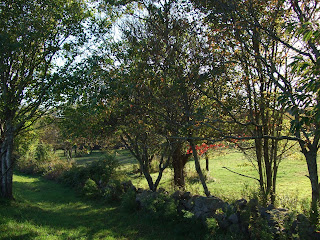 I am glad you are doing fun things!! The improv class sounds like a blast!!!

We are sooo overdue for a date! :)

Hmmm - Ray's voice would send me to sleep - it's a bit toooooo relaxing!

Good job on the update!! Proud of you girl - now, your next challenge is to swim in the North Sea in Scotland - THEN, and only THEN will we see what you're made of!!!!!

Kelly,
Ray is fabulous...and a "mainer". Glad you are having fun with the improv class.