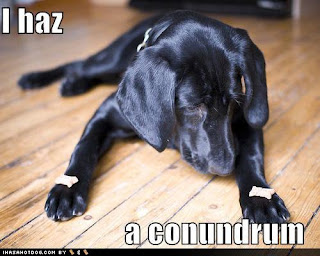 At least that's what my oncologist thinks and most likely many of the men I've dated, but that's a whole other story.
I had my PET scan on Monday and met with my oncologist that afternoon for the results. They were sorta what I was expecting and sorta a surprise. I still had activity on my throat which we need to get to the bottom of. I also had spots lighting up in my armpits and my neck, all symmetrical, which isn't a sign of Hodgkin's but my oncologist doesn't know what it could be. He's running additional blood work (you should see my druggie looking arm - 4 pokes and lots of bruising) to rule out a few things like mono, etc. We're thinking I've got to have some sort of immune disorder or something since I'm literally sick every month and a half, and umm that's not normal for someone who's been out of treatment for two and a half years.
My oncologist was pretty concerned and probably spent the longest time with us that he has in a few years trying to determine what's going on with my body. We decided I'm going to do a biopsy of my throat with an Ear Nose and Throat doctor to figure out why my throat infection of sorts hasn't healed in over three months. Hopefully, they won't have to cut me up externally at all and can go right down my throat instead. That was a big concern of mine, my scars just don't heal and stay super pink so I'm not really excited for an additional scar and would probably look into other options if that was the case.
And of course in the back of my head there's still that idea that it could be the Hodge. When it rains it pours, right? I think I'm just in a funk lately so I'm thinking the worst. I've been trying to keep busy and so far I've been pretty good at that. I went to the Big E yesterday with an old friend that I grew up with. As always, the highlight of the day there was the petting zoo with the goats, lambs and donkeys! I'm such a dork. If any decent pictures surface, I'll be sure to post them.
XO
Posted by Kelly Kane at 9:49 PM

Ugh to conundrums and to this one in particular. Trust you not to be straightforward :0P

Aw Kel, I'm sorry to hear the results weren't what you were hoping, and I hope it turns out to be an infection or something and nothing worse. I'll say a prayer for you, hang in there!!!

How about Lyme Disease? Did they give you the antibiotic that they usually use for Lyme? Sometimes it takes more than a 6 week course of treatment.

Dear Kelly, You were kind enough to answer some questions I had about my daughter a while ago and I was/am very grateful for the insight. I am praying for your strength and health. Diane Hand

Before we declare it's all doom and gloom, let's see what the tests show. It may be simpler than we think.

Continue to have fun! Distract yourself when you begin to worry about the scan's results.