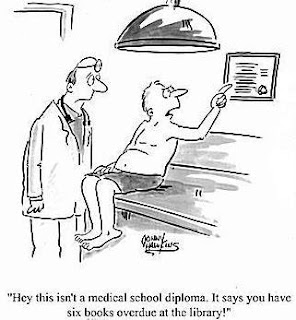 I'm sitting home with some free time and my laptop open. Perfect time to catch up on my blog a bit. I just went through some comments that had been stuck in my spam filter dating back to August. I had saved one comment that I had meant to follow up on but never had time to actually call the person that left it. Yes, that's right, he left his phone number. He stated that he was a doctor and that he could help me cure my cancer by changing my diet, not letting me take drugs or radiation. Funny thing is, I haven't had cancer in years. Nearly 4 years to be exact. Of course, this guy didn't read that here, or anything about me. I had multiple comments from him which I deleted so you guys wouldn't get sucked in.

I understand that there really are good people out there that want to help others. That's great! I wish there were more people like that. On many occassions, I have been that person, emailing with people struggling with the hodge and stumbling across my blog and I am happy to. But there are also people that are sneaky and out to potentially scam people. After our 11 minute phone conversation, I wasn't convinced this guy was an actual doctor or looking to help cancer patients, he seemed instead interested in possiblly preying on the weak, and uneducated, which I am neither. And to top it off, I Googled him and just found random comments of his, including ones that had been deleted by webmasters for my same concerns.

Trust your instincts, folks. Beware of people that will prey on your weak and hopeless feelings.