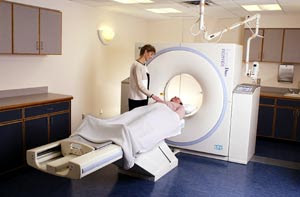 Yesterday was CT scan day. I realized the night before that I didn't have any instructions on whether I was supposed to fast or not before the test. I'm really loving the chick that schedules my appointments (insert sarcasm here). I tried calling the hospital the night before, but no one could tell me because the CT place was closed. So they said just call at 8am. So I called at 8 to find out that I could only eat until 8:30 - so I scrambled to finish getting ready so I'd have time to eat something. I'm still staying at my parents house so I had to drive an hour and a half to my appointment. I had to be there for 11am. Now, apparently, the first CT scan I had wasn't as thorough because I didn't have to drink anything for it, just get injected with a dye that makes you feel like you're peeing, no big. So when I got to the hospital and they asked me what I wanted to drink and they told me I'd be drinking 5 cups of it - I was not excited.

I wasn't feeling good to begin with, but it was supposed to be a really nice day (70 degrees!) and I was pushing myself into a good mood on my way there. Then I found out I had to drink a ton of juice... not exciting. So I chose fruit punch -- you have to drink 2 cups right away and then 1 cup every 30 minutes. I barely got the first cup of fruit punch down, I went back to the front desk and said this isn't going to work. They said people like the orange juice and to try that -- and that the fruit punch was bad. Yeah awesome. So I drank my OJ, it was still painful, and honestly, that much acid in my stomach doesn't sound like the best idea.

Then it was IV time. My veins were (and still are) hurting a lot so I warned them that it can be difficult to do the IV. My veins totally need a break from poking. So the woman that had taken me to put my IV in had gone and got someone else that is better at IVs. The girl had no problem getting the IV in once she prepped and we tapped it on with paper tape because I'm allergic to the other stuff they give you. The first lady came back and brought me to the CT scan, she was older and I just assumed she'd been doing this for a long time. She was weird and I should have known better though. I'm sitting on the bed thingy that slides thru the catscan and she's grabbing at my IV (WHILE I'M MOVING!!) and she ends up pulling it out!!!!!!!!!! I was soooooo mad, and I started crying. I screamed "What are you doing!!?!" and she made up some excuse about wrapping my IV around my finger -- who does that while the catscan is friggin' moving! JERK! The dye squirted out everywhere too! She quickly disappeared. Meanwhile, I'm freaking out because I don't feel good and I know they have to put another IV in me now! It took 2 more tries and 20 more minutes to get another IV in. What a terrible morning. All I wanted to do was go home. I have a feeling I might try to go to Dana Farber or somewhere else for the next one.

Another thing I tend to do when I'm feeling bad is eat food that is bad for me - or that will make me feel worse. I like to think of it like a dog trying to make itself sick by eating grass, except I'm eating french fries. I got some greasy lunch and went to my apartment to get my mail and take a nap.

I had plans to meet Mandy for our fat kid bonanza last night. We went to the Olive Garden, yumm, and ate like it was going out of style. It was good to catch up with her. I'm totally losing my funness these days, so it's good when I actually get out and see people.
Posted by Kelly Kane at 7:01 PM