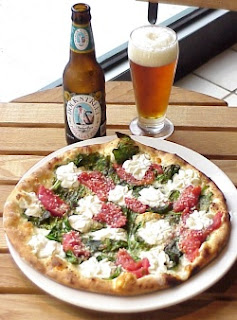 Not too much going on this weekend so far. Last night I went over to Julia's apartment for some pizza, TV and fun - it was a good time. I brought them over some wine that someone left at my apartment in January (I'm not a big wine drinker) and then we decided to go get some beer around 10ish. I ended up sleeping over because I had 2 beers and was a little buzzed, yep, I'm a cheap date! But I was up by 8am this morning and decided to leave around 9 while Julia was still sleeping, did a bunch of errands before 1pm which is sooo rare for me! I showered and then took a nice nap on the couch.
Yesterday Julia also told me that she has the same eczema that they think I have (I'll find out more on Monday) and she gave me a bunch of tips which was great! I had no clue that you weren't supposed to keep using the steroid cream all day, she told me that it actually didn't work at all for her and said that she typically uses creams to moisturize the bumps which apparently helps calm it down, also she suggested Vaseline for night time - I tried both, bought some Eucerin Calming Cream and an anti itch cream as well -- it seems to be helping a little, but I'm also noticing some crazy itch spots on my legs, so I'm really looking forward to going to the dermatologist on Monday! I'm hoping there's some quick fix, but it sounds like there isn't and it can last a really long time! UGH and GROSS!
Oh and no, I didn't really go to audition for The Biggest Loser, Veronica was right, I don't even weigh 214lbs and that's how much weight the winner lost! If they did pick me, I would probably get voted off pretty quick, so eh, screw it :) I really want to go to the gym tonight, but I'm so friggin' itchy that I'm thinking it's not the best idea. I'm totally blaming this skin crap on chemo!
Okay well that's about all that's going on right now. Sorry it's not so exciting, I'll post more soon!
XO
Posted by Kelly Kane at 7:14 PM

Glad you have fun with beer, tv and pizza! Sorry your all itchy. Hope the D doc can give you something tomorrow to help calm it down!!
san

Good luck at the dermatologist tomorrow - we'll be thinking of you Miss PF...........xx