It's been a few days since I've posted. I've kinda been in a funk and have just been frustrated with the people around me lately. You always hear about these people who get sick and have the most amazing friends that really help them get thru everything, but I've recently realized that it's not always the case in real life. People have other shit going on, and sometimes it just feels like you're a nuisance when you want to go out and have fun and keep your mind off of some things. Sometimes I feel like I've used up all of the sympathy from my friends and I've only got family to rely on. It sucks to be 25 and have to rely on your parents to take you to you doctor appointments and surgeries, and all of that crap. I feel like I'm too old for needing them as much as I do. So yeah, I haven't written because I didn't want to come off as a giant jerk, so I waited a little while to post.
I am glad that Bekah has recently moved nearby, we had dinner last night and it was great to hear the same things from someone who gets it. We're going to try and do something this week if we can. Here's a picture of our dinner last night 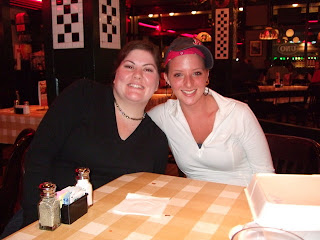 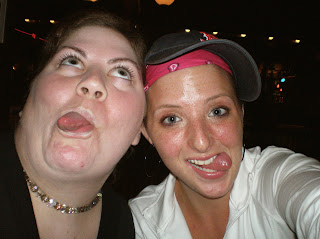 Anywho, I don't really have much else to report. My skin is back to being itchy. I'm super tired lately and actually slept until about 4pm today, and was still tired. But I did make myself shower and get out of my apartment for a little while. I think I'm going to sleep late again tomorrow, but I did want to try and stop by work and say hi, I meant to call and check in today, whoops. I just had a mini Wii bonanza with Pat, we decided that boxing is an insane aerobic workout!!!!! Tomorrow I'm going to try and play real tennis with Mandy after she gets out of work. Should be funtastic. It'll only be the second time I've played, but it's been so cool and comfortable lately, I might as well take advantage of it - especially since I've been pretty lazy lately - AND because I probably won't be able to play for a while after surgery - and maybe even Wii, I'll have to ask to doc that!!! I also want to get a massage this week if possible, I'm going to try and call tomorrow and see what I can do.

Okay, I'm going to get going for now. Sorry I've been such a blog slacker, and thanks for the comments.

Kelly you are so tough and strong. I totally know what you're going through. It's funny that when you do get cancer, people treat you like you have a communicable disease! However, a really smart, sexy chic by the name of Shelly once said: "You find out who your true friends are when you move and when you have cancer."

But I truly, truly mean it when I say let me know if you need anything. I'm not the type of person who would sugar-coat things and tell you everything's going to be "easy" and not to "worry." We are humans-we are programmed to be nervous and be sad and be weak sometimes. That means you're normal!

Concentrate on you-don't forget doing the things that make you happy and find peace w/in yourself. I don't like to use "God," as I'm not overtly religious by anymeans, however, the Serenity Prayer is true. God gives you the strength to deal w/all the shit that comes your way. I know it doesn't necessarily say "shit" in the bible, but hey, I can improvize! You have it in you to be able to deal w/anything. That is what life is about-creating your own happiness in the midst of all the chaos!! xoxox Shelly

Maybe thursday we should both get a massage and get our toes done?

mmmm.. I should be free all day Thursday the way that I'm workin' this week. Call you soon.