As Promised - A View From My Living Room

This picture was taken at 10am this morning...it's actually prettier in person, but still beautiful nonetheless. 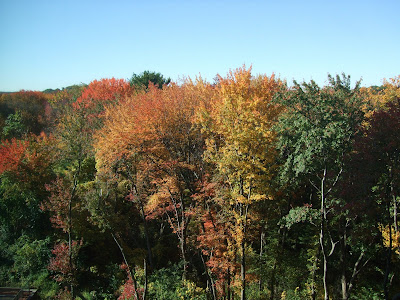 I heart Fall, a lot!

Oh and yes, I was up at 8am... mostly because I fell asleep on Pat's couch and then left because he was going to go play football, and I even went to the grocery store on the way home! Early bird!

Yesterday afternoon I hung out with Bekah and Michelle and we walked around Faneuil Hall -- which happened to have a pumpkin bonanza going on!!! Did I mention that I love fall? Well, I do. Anywho, we walked around, and it was a cloudy yucky day at first but by the time we left it was hot, sunny and blue skies! TOG I tried to find you a duck kazoo like mine in random gift shops there, but no luck, so I'm going to go to the actual duck tour place, stay tuned.

After hanging out with Bekah and Michelle (pictures to come soon) I headed home and was beat... then I got a second wind and went over Pat's place and hung out with him and some of his work friends at a bar. I'm gradually getting better at being a sports watched, you should be impressed. Then, the game ended, and we went to another work friend's place who was have a terrible sunglass party, it was AMAZING! Except by then I was a lil drunk and adding dark sunglasses to the mix is tough :) But of course, I still rocked them. Oh and someone gave me a terrible tie-dyed neon green hat to wear as well, I know exactly what you're thinking --- Watch out single men, hot lady coming your way! 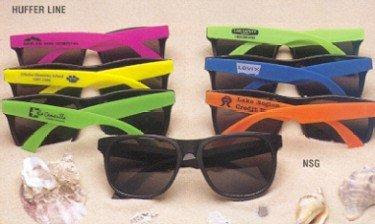 Anywho, that was it really. We went back to his place, tried to watch the Departed for the second time, passed out on his couch and apparently ... no allegedly... snored and answered him when he asked me questions and tried to wake me up (ha ha!) apparently he woke me up to get me off his couch and I just kept saying, OK... and went back to sleep! I probably thought it was time for school or something, ha ha!!! Hilllllarious!

That's all for now. I'm going to go shower and then I forget if I have plans or not today, either way, I'll keep busy... you know how I roll!!

Oh and tomorrow I'm going to the Wellness Community to discuss bringing back some sort of young adult support group/ festivities... if you have ideas please let me know, it should be fabulous. I'm thinking we should have random bowling night or something, so people can meet other cancer peeps their age, and have fun instead of sitting in a stuffy room bitching and moaning about their feelings... just my 2 cents.

Hey there. I love the photo out your window.

I thought I would let you know about this documentary I've been wanting to see. She has written a book as well and it is called Crazy Sexy Cancer Tips.

She's also going to be on Oprah on monday. The info is on her blog.

I hope you have a great day!

Thanks for thinking of me! =)

Wow - I love the view from your window! Can't wait to see it for real, although it'll be summer not fall, but still lovely I bet!.......xx

i'm so jealous of the view out your window!! YOu know what mine is lol!
You're welcome for the Netflix :)