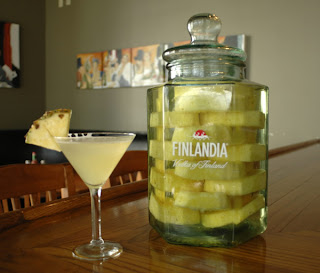 Ha! I drank a lot this weekend, more than I have in a very very long time. It was hilllarious. Me and my two cousins, second cousin's, Anne Marie who is 45 and Mary Anne who is 60ish... and me, ha! But you would be surprised, we had a really good time. Including when Anne Marie had me do 5 shots of pineapple vodka, ya know the kind with pineapple sliced into a big jar of vodka, so basically it's straight vodka, and I had 5 of them, mwahaha! So basically, I'll be going back to Artu (in the North End - yes Wullie and Veronica, I'll bring you there too!) and will be sitting at the bar doing those shots again sometime soon! Ha! Or maybe I'll make my own, or both, duh!
Anywho, I had fun, picked up a few guys that soon confessed they secretly had girlfriends, ha! At one point, I walked away without saying goodbye, I just crossed the street and left. It was HILLLLARIOUS! It was after I was dragged to a random bar a bajillion blocks away from our hotel, and told that it was right down the street, and then I got there and it was packed! I think the guy was trying to make me go get food with him, and then I found out he like lived with some girl, so I literally just crossed the street and walked away, I know, I'm awesome! So no new men for me, no snugglypoos, no action, no nothing... maybe a free beer? ha!
Other than that, I did a little shopping, and finally got Pat's present... which is awesomely hilllarious... and if he and his roommate didn't read my blog every once and a while, I would write what it is... but for now, you'll have to wait until Christmas-ish time.
Oh and another random thing... so Anne Marie and Mary Anne (I know, too many Anne's especially if you knew that I'm Kelly Anne Kane, ha!) were getting ready, and I was bored, so I started playing with Annie Marie's flat iron - just trying to straighten my bangs, and then I kept going because I thought it was funny -- I did the yucky curly underneath of my hair, and it came out super super straight, and actually looked pretty amazing! Obviously the front was really thin since I just don't have a lot of hair there, but I think if it were shorter, I could totally rock the fabulousness that is my cancer hair - because let's face it, my hair is still better than a lot of people's hair, so ha! So now I'm going to figure out the exact type of her iron, which is kinda pricey, but clearly worth it, and I'm going to buy it for myself - or get someone to get me it at a bargain price -- anyone have any hair stylist connections for me to use? Either way, I'm getting it. I'm coloring and cutting my hair on Friday, which I'm super excited about! I think I'm going to cut it chin-ish length, and hopefully then I won't need to pull it back anymore or at least as much! I'll take some glamour shots on Friday if you're lucky - I don't think I have any plans that night yet, and I definitely need to work on that :)
Anywho, other than that, not much else is going on in my life. I just really wanted to share my love for pineapple, ha! I hope you're all well, and if I owe you an email or a phone call, I might need a nudge, this whole working thing is tough sometimes.
XO
PS I updated my music again... Wullie there are a few Boston songs for you :)
Posted by Kelly Kane at 11:10 PM

I'm glad you had a good weekend. I'm excited about my haircut today. I'm seeing a senior stylist at my favorite salon. They do the most amazing things there. I'm not sure what could be done with mine as it is a mop and I'm trying to grow it out.

I haven't been for a cut in almost 2 years!

I looove pineapple infused vodka lady! And btw - if you're looking for a good straightening iron, go with the Hai, I just got one (same as my fancy hairdresser's) and LOVE it. It was pretty pricey but totally worth it. Much less damaging to the hair!
- Jess S. (aka fellow lover of shiny, straight, just colored hair!)

I know I'm a few years late on this, but I want to hit up some Pineapple Vodka with you next time you're in Boston. Artu, you say? I'll have to look for it the next time I'm in the North End.