Have You Blamed Drew's Cancer Lately? 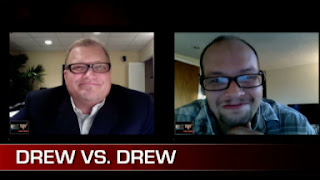 I've been overwhelmingly impressed by Drew Olanoff over the past year. He's a social media guru, the proud owner of @drew on twitter and brains behind #blamedrewscancer. He's a fellow Hodge warrior and has been creating some serious buzz, awareness and cash to benefit the LiveStrong Foundation.

People can blame whatever they want on Drew's cancer. How cool is that!? I mean, let's face it, I often blame a lot of stuff on the beast that is the Hodge. Weight gain... Hodge. Gray hair....Hodge. Lack of memory.... again, the Hodge. So why not blame everyday things on Drew's cancer as well? I #BlameDrewsCancer for my computer being slow. It's that simple. And from the looks of his Website, it looks like he's hoping sponsors will donate for every tweet to LiveStrong after he beats it.
Celebrities from Alyssa Milano and Lance Armstrong are following Drew and blaming his cancer for loving chocolate or breaking a bone. And get this, comedian Drew Carey is offering to pay $1 million to the LiveStrong Foundation for Drew's @drew username on Twitter if he gets 1 million people following his @DrewFromTV username on Twitter by December 31. So why not go follow @DrewFromTV on Twitter.
Go!
Posted by Kelly Kane at 11:35 PM

What a cool story! I blame Drew's cancer for making my daughter split open her chin this evening!! ;0P

Very cool! Thanks for sharing this. Hope you're doing well. Will email! :)