When I was battling The dreaded Hodge 5 years ago... hiding under the covers miserable looking for people on the Internet experiencing the same things I was, I stumbled across the most hilarious blog name ever... the title was, "I'm Not An Asshole Surgically Speaking."

The blog was owned by a saucy young woman named Becca Babcock who was struggling to pay her doctor bills and beat Colorectal cancer, live life and was just two years older than me. Once I read that blog title I knew we had to be cancer pals, afterall, if you don't have funny during cancer, the battle is so much harder. Dealing with the difficult side effects of Colorectal cancer is no easy feat, yet, Becca always tried to find the humor in life.

I love to laugh. Despite all my dry deadpan wit and sarcasm, I love goofy things. I would much rather see a comedy than a drama. And we all know (well, maybe we don't but we should) that laughter sure does help get through a tough time.

Pretty much sums things up, huh?

Unfortunately, after several years battling Colorectal cancer, Becca passed away this weekend. It truly breaks my heart when people like her pass away to stupid, lame, annoying and miserable cancer. Becca's humor definitely helped me find strength during my own battle with cancer. While we never met in person, I honestly counted her as one of my friends. We're a strong bunch, us warriors. It's a bond like nothing else.

I'll leave you with this amazingly inspiring photo her friends have been posting on Facebook this week. She was part of a colon cancer (Colondar) calendar to raise money and awareness. 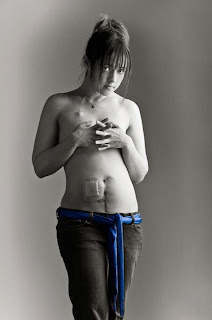 Also, I found this inspiring video update from her last year. Quite touching.


Remember folks, live for the now.

So so sad, Kelly. You two were kindred spirits, seemed to have the same sense of humor, huh? XO.

Im and RN...and honestly, when i am alone with patients going thru trauma or a traumatic experience....sometimes all you really can do is crack a joke, wink, and laugh out loud.