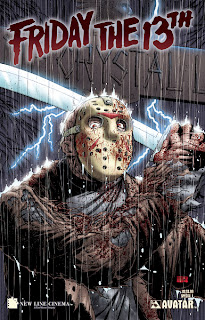 Dun dun dun, it's Friday the 13th! It's also another super beach day, hooray!! I actually woke up pretty early for me today around 9ish and helped mom do some cleaning in the house since we have guests coming tonight. I was drenched in sweat by the time we were done, yuck! I had to take a shower to cool off. Soon we'll be going to the beach, but we don't want to go too early and burn! I got a mini sunburn yesterday, it'll probably be gone in a day or so, but defintely want to take it easy on the sun.
I also want to share my pal Ryan's latest news (ya know the guy that made me the chemopalooza shirt!) I'm sooo frustrated for him. Here's his story, he finished chemo a few weeks before I did, got his scans last week and got the results yesterday - he still has cancer!! Apparently, his oncologist was giving him chemo for a 170lb, 5'11 man (chemo doses go by your weight/height) and he's actually a 6'3, 350lbs, BIG DIFFERNCE! I'm just so frustrated for him, now he has to do 4 more rounds of chemo - ugh! Stupid oncologist!! Nothing like spending 6 months doing chemo, thinking you're done and then told just kidding, 2 more months!! Grrr. Anywho, please keep your fingers crossed for Ryan to officially make cancer his BITCH and for bad things to happen to his oncologist :) Also, leave him some love on his blog!
Okay, that's all for now!

Hey Kelly - I'm with you about Ryan. If that had been Wullie he'd have gone ballistic! Poor fella.......x

Glad to hear that you're having a good time on the island - but watch that sun, girl, no risks now!!(that was my school teacher/mummy voice - so listen up!

Someone has to tell me what's goin' on and knowing you check the boards pretty often... have you been able to get on the forum, or is it my excellent computer that seems to be the issue? write me back. let me know... if you've been having some difficulty signing on, or even having the forum come up on screen.

Hi Kelly,
I just left Ryan a comment...I can't believe that. That is horrible. Like he hasn't been through enough already.
I also went and checked out his shirt website...I found a few that I want to get but I don't want them in white, so I'm going to see if he can do them in other colors. SOunds like your having a lot of fun. I really want to get out of the house, but I can't be in the sun for very long, the heat is kicking my ass. I love going to San Francisco and just hanging out. I just don't think I'm up to it. I get tired so damn easy. Anyway, I hope you enjoy your last couple days on the island.
Take care, talk to you soon.

You are by far my favorite internet stalker! Thanks for the kind words.
It's gonna be a chemoriffic Thursday once again!

Kelly
Keep enjoying your vacation, you deserve it. Speak when you get back.