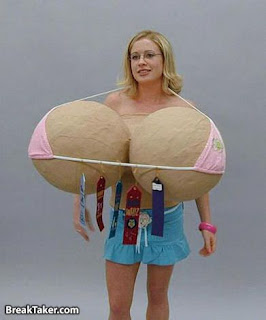 You know it's funny how going thru chemo really makes a girl appreciate a nice hot shower, ya know, without globs of hair falling out! I'm back at my apartment for the next few days. I came back late this afternoon, I slept until almost 1pm today, and could have slept for another 5 hours, I couldn't believe how exhausted I am!
I had to drive to Boston to NEMC to pick up some medical records for the surgeon, I actually haven't looked at them yet. I had to go all over the hospital to pick stuff up, and then had to wait to have stuff burned onto a disk, so I was there for about 2 hours, blah. I went to say hi to the chemo nurses today, hoping that Paula had worked her day off for some random reason, but of course she didn't, so I just said hi to a few other nurses, it was actually pretty empty when I stopped by. I gave them the update that I feel like it's specialist time and I'm working on switching to Dana Farber. I was telling them how stressful it's been and how I'm thinking the hodge has returned, and how my onc at Dana Farber even brought up the possibility of a SCT, and one of them said "Oh a SCT isn't that bad," which is interesting, since I've read about lots of folks and their SCT's and it hasn't exactly been awesome. I'll leave it at that, interesting...
Tomorrow I'm going to get my CT scan at Brigham and Women's hospital (they're associated with Dana Farber), and then Thursday is the surgeon appointment. I gotta get up super early because silly me, I forgot to register so I don't have a card, and I have never been there so I have no clue where it is -- of course, I'll look up directions online as well!
I've recently noticed that I'm keeping about the same number of daily hits (about 50ish) on my blog, but I'm noticing more of them are located in Massachusetts, so thanks friends and family for reading more often! Now I have a question for the Boston-ish folks, anyone have a good PCP that they think I should go to? I really need a new one. I thought I had officially switched to one at NEMC, but it turns out whoever I talked to in the general medicine dept was not so smart, and actually chose a primary care doc for me that ISN'T a PCP, she's actually a geriatric doctor, ya know for old people!!! And she's already canceled an appointment on me to meet her. I didn't find out that she wasn't officially my PCP until I called Blue Cross and they told me she wasn't one...anywho, long story short, I really need a new one for when I get simple stuff like colds or for my referrals. So if you have any suggestions drop me an email (kelly dot kane at gmail dot com).
One randomly exciting thing I heard yesterday was that my work has finally gone officially "casual" with dress code. It's music to my ears because I have no work clothes that fit me, but I did just order 2 new pairs of jeans, sooo when I actually do go back, I won't have to break the bank and buy tons of new clothes, in fact maybe by then I can lose some weight and fit back in my old stuff :) Oh and of course, that means I can wear comfy shoes all the time!!
I feel like there's more I need to post, but I really can't remember right now. So I guess it's almost bed time. I should pop an ativan or something so I can make sure to get some restful sleep. Oh and again, thanks everyone for the birthday wishes. Oh and Susan, thanks so much for the card!
XO!
Posted by Kelly Kane at 9:30 PM

First things first, Kelly - the picture? Did I miss something? Is there something you're not telling us?

Secondly - no, an SCT is not pleasant (I'm sure there are worse procedures) but it IS doable - I have a man here who can attest to that..........BUT, one upside of the SCT is that Wullie lost a lot of weight and has kept it off - there's always an upside!

I also want to point out that you're still jumping the gun a bit - try not to dwell on what's ahead until it's set in stone....easy said, I know :( .

Thinking of you and hoping tomorrow goes smoothly - get some sleep so that you can take in everything the surgeon tells you - is someone going with you?