If You're Going To Be A Bully - Be A Cancer Bully

It's been nearly a decade... or at least a few months. We all knew this would happen eventually, yes, we're growing apart and starting to have different interests and meet different people. I don't have cancer anymore. I haven't for more than 3 years. And that, to me, is awesome. I do find myself thinking about it less, but still almost daily because it really has shaped me into the lovely person that I am today. It's cliche, and yes,  I totally understand this, but it's true.

I do actually have a cancer topic to blog about surprisingly. It's even a slightly pre-meditated post, and usually I just kind of type until things come out and voila that's the usual way I write. Anywho, today I'm finally getting around to writing about a conversation I had with a good friend of mine regarding the thing that this blog was based on - Chemopalooza.


Did you know that I did some extensive Googling before starting this blog, and no one had used the term before -- now look online, you can buy shirts saying it! My buddy Ry Ry actually was the first to create a shirt for me with it - and then some other Websites copied my idea. I guess imitation is a form of flattery, right?
Well anyways, back to my conversation with my friend Jeff. He was telling me that on separate occasions he had mentioned Pre-Chemopalooza (the original party) to two of his friends - one I have met a few times, and one I have yet to meet. Well the latter was impressed by my strength and humor and though the idea of throwing a party, a last hoorah if you will, before my life substantially changed.
The other thought it was offensive that I tried to live it up before I endured chemo. Almost like I was supposed to sit in my bed, perhaps shopping online for my future headstone and writing my eulogy incase I didn't win the battle. I guess he was almost offended by the whole idea.
I understand both sides - I obviously lean much further toward the first understanding. I honestly think it was the best party I've ever thrown, and the fact that it was in my honor, during a time when I could barely sleep and needed to keep busy for fear that I might have a breakdown worrying about the unknown. It was perfect. It filled so many voids for me, the fact of gathering so many friends together to laugh, be stupid, and enjoy pre-cancer I mean chemo me. I already had cancer, duh that's what got me into the party planning business. Ha.
But the guy that thought chemopalooza was wrong - thought like I was mocking cancer. He just missed one thing - I was the one owning the cancer. And well, let's face it, if you are going to be a bully - you might as well be a bully to something life-threatening - and more importantly hair-threatening. I was mocking the cancer, I was hoping it would go back to where it came from, I was hoping it would just realize it was in the wrong body, the wrong lymph nodes and fuck off while I laughed and sipped cheap champagne.
Really, I don't have much to say about this, other than how amusing it was to hear two reactions to my cancer story. Maybe amusing is the wrong work - perhaps thought provoking is a better way to sum up my thoughts. I don't really feel like I"m back to old me -- but I guess old me died a little with the hodge. I looked at a picture today of Pre-Chemopalooza and I look different. Now I just feel a bit more weathered. A bit more scarred. Literally and figuratively. 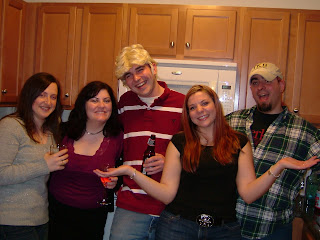 I'll leave you with this picture from Chemopalooza. You should also listen to this song because I was listening to it on repeat the whole time I typed this up and I love it. I couldn't find it online or I would have added it to my playlist.

What a brilliantly written post, Miss Kane!! While everybody is entitled to their opinion, I find it a bit difficult to swallow the 2nd person's reaction - who is s/he to judge how you reacted to the whole cancer thing - does s/he know how s/he would react in the same situation? At the end of the day you're a good time gal and it was obvious that you were going to find a reason for a party in amongst all the fear and turmoil your life had given you - and you did it with STYLE!
So - don't be so bloody gracious, KK......opinions are welcome but so long as they recognise that in shit situations NOBODY knows how they're going to react and how they react is a personal thing to be respected by all......so THERE!! ;0P
Love ya, Miss Chemopalooza...and yay to 3 years no cancer - hoorah!! :0)
Enjoy the looooong weekend!! <3